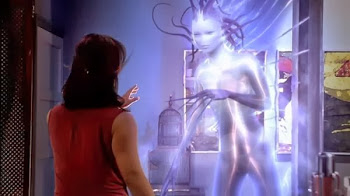 A transcendent being using a higher form of communication to bestow untold knowledge to a human, through the contact of outstretched fingers? Say, this looks familiar...
Tosh: So, I'm shagging a woman and an alien.
Mary: Which is worse?
Tosh: Well, I know which one my parents would say...
— Toshiko figures out her new romance crosses several lines
Advertisement:

1812. A young prostitute named Mary leads a willing Redcoat out into the woods for some fun when he starts getting a little too fresh. She strikes him back and then scampers off further into the woods. She notices a bright light and a weird buzzing sound and goes to investigate. The Redcoat catches up to her, aims his pistol at her and fires.

Our gang pulls up to a dig site. They find an old alien thingamajig along with a skeleton that has a big hole in the chest cavity. We are shown a lingering shot of a short-haired blonde woman watching the crew. She looks a lot like Mary.

Poor Tosh feels like no one understands her and goes out for a drink. The same blonde woman from earlier shows up and rattles off a considerable amount of information about Tosh, introducing herself as Mary, a "scavenger": basically one of several people like Torchwood who collect alien objects but aren't nearly as organized. She offers Tosh a pendant that allows her to hear peoples' thoughts. Tosh says she'll show it to everyone else, but Mary is convinced she won't.

Naturally, Tosh doesn't, and we get a nice day of Tosh hearing everyone else's thoughts, including learning about Gwen and Owen's new affair, and Ianto hurting inside.

She meets Mary again and they discuss the powers of the pendant, which leads to them having sex. Mary suggests going out in public to be able to use the pendant better. Tosh does so and ends up thwarting a divorced man from committing premeditated Murder-Suicide, but still feels like she's being invasive after hearing more thoughts from her coworkers.

Tosh and Mary start dating. Tosh tells Mary that she'll give up the pendant to them, but Mary is rather insistent that she doesn't. She reveals herself as a telepathic alien who escaped from her homeworld and that the device Torchwood found is a transporter that can get her back home. She refuses Torchwood getting involved, as she believes they'll lock her up and study her.

It turns out to be a clever bit of manipulation, as Mary eventually lets Tosh convince her to take her into Torchwood to recover the transporter. Jack shows up to let Tosh know the truth: Mary didn't come to Earth alone in that transporter, she was sent here with a guard, whom she killed. She possessed the real Mary's body back in 1812 and plucked the heart out of the Redcoat, something she continued to do for years. She holds Tosh hostage in exchange for the transporter, which Jack gives to her, with the coordinates set for the centre of the sun. Tosh is horrified, but Jack quips that it's not that bad: the sun's probably not even hot, seeing as it's night.