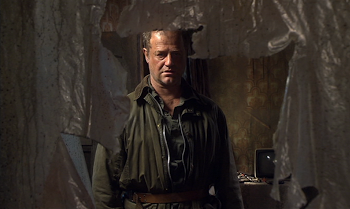 This time, the monsters aren't some sci-fi creation. They're just plain humans.
Tosh: Call me suspicious, but this has all the hallmarks of a trap.
Jack: Yeah, I was just thinking the same thing. Anyone fancy a walk?
— Torchwood Three playing things by ear, as per usual
Advertisement:

A young lady is on a drive out in the country when she spots a body in the road. Turns out it's not a body, but clothing trussed up to look like one. She tries to get away from whatever set up this decoy, but to no avail.

Torchwood is on the scene and goes out camping nearby. Gwen decides to play a nice campfire game of "who was the last person you kissed?". Tosh hasn't kissed anyone in months, but Owen was her last, Ianto lies and says his last kiss was with Lisa and he doesn't want to talk about it, Jack just sort of sidesteps the question, and Owen informs the group that he snogged Gwen during the Cyberwoman attack. Gwen isn't happy with the whole group knowing about that.

Turns out this local area is the source of several mysterious disappearances. As they set up camp, Gwen and Owen go out and get firewood, Owen grilling her about the kiss they shared a few episodes ago. While this is happening, they find a flayed body in the woods, all the meat and organs gone. While investigating, the team hears the SUV being stolen. They track its signal to a nearby village.

Ianto and Tosh go look for the SUV while the other three check the area. They find a rather nervous kid who blasts Gwen with a shotgun. Owen fixes her up and the two share a tender moment.

Meanwhile, Ianto and Tosh get close to the SUV, but get captured by our Monster of the Week. They come to in an underground bunker where they find human meat in a fridge. Wondering what alien could be doing this, they're let out of captivity by a nurse who says she has to lead the two to "them".

Turns out she's one of "them". Our "aliens" are merely cannibalistic humans. Gwen and Owen, having separated from Jack, get held at gunpoint by a police constable who's in on the act, and everyone gets gathered together to prepare for the village's "harvest". Just then, Jack busts into the building on a tractor and incapacitates the cannibals.

Afterwards, Gwen interrogates the patriarch, trying to figure out why they cannibalized people. The only response she gets is "it made me happy".

Shell-shocked by the ordeal and unable to confide in Rhys, Gwen has now begun to find solace in sleeping with Owen.

This episode has the distinction of being, as of 2011, the only televised episode of any Doctor Who franchise series to have absolutely no science fiction aspects in the story (other than Jack's immortality, which isn't necessary to the plot, and incidental Torchwood technology). This is Played for Drama, as Gwen has to come to terms with humans being just as horrifying as aliens sometimes.