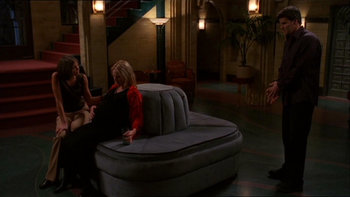 In 1771 Rome, Angelus is trapped in the sewers by his nemesis, Holtz. Finally having caught up with the monster who murdered his entire family, Holtz tortures Angelus for a day, until Darla arrives and rescues him, despite the efforts of Holtz and several Inquisition priests.

In present day L.A., Darla arrives in town on a bus, having drained all of the other passengers first. Meanwhile, Angel trains with Cordelia on her hand to hand combat skills. They discuss the hinted prophecies that the apocalypse is coming. Angel is skeptical, as he's heard a lot of similar rumors in his long lifetime. Cordelia has decorated the dungeon with plastic flowers, and talks to Angel about plans for his birthday. Fred walks in on them sparring and, after Cordy has left, tells Angel that he and Cordy are attracted to one another, an idea that Angel greets with incredulity.

Gunn and Wesley break into a home to steal the lost Nyazian scroll, which has part of the apocalypse prophecy contained in it. They are caught by the owner and make a deal with him to see the prophecy. Back at the hotel, the crew talks about the prophecy of Angel being turned into a normal man. Fred does calculations to figure out when the prophecy will come to pass, and they all show that it has already begun, starting with some unspecified bad thing.

At that moment, a heavily pregnant Darla walks in and tells Angel he's knocked her up. Cordelia is very upset that Angel would sleep with Darla, especially because he swore he would never do anything like that. Angel and Wesley confirm that what they're seeing is impossible, as vampires can't fall pregnant. Cordelia acts very protective of Darla, as one does for a pregnant woman, and is very angry at Angel. Fred wonders if this is the prophesied bad event. Angel wonders if she's really pregnant, and Darla offers to let him feel the baby kicking inside of her.

The gang goes to visit the host at Caritas, which he is in the midst of rebuilding. He is currently being visited by the Transuding Furies, and their delight at seeing Angel further inflames Cordelia, who takes Darla to lie down in the back. They talk with the host about what the pregnancy means. They wonder if this child is an evil being from prophecy, and is destined to be bad. But Fred says "screw destiny," and that they can defeat anything.

Cordelia starts to bond with Darla over demonic pregnancies, until Darla attacks Cordelia and starts feeding off of her.The struggling Cordelia then has a vision, and Angel arrives and flings Darla across the room. Darla runs away and Angel tells Cordelia that he'll kill Darla for what she just did. Cordy apologizes for her treatment of Angel and the fact that she let herself forget what Darla was before she remembers her vision—Darla has a never ending hunger now that she's pregnant, and she craves young blood. Angel prepares for battle as Cordy realizes she knows where Darla must have gone.

Angel catches up with Darla in an amusement park, about to feed off a toddler. The two struggle, and Angel strangles Darla, to no effect because she doesn't breathe. He grabs a stake and is about to strike her down, while she begs him to kill her and make her hunger stop. But Angel stays his hand; what Darla said has finally registered. He realizes that while they don't breathe, the baby has a heartbeat and breathes, and so the baby must have a soul. He takes her back to the hotel to take care of her, while taking precautions against her feeding off anyone there. Fred realizes that the thing from the prophecy is about to arise at any moment. In an underground cavern, there is chanting, and then out of a stone tomb emerges... Holtz!