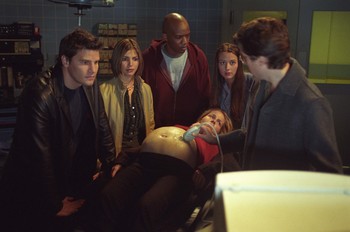 In York, England, 1764, vampire hunter Daniel Holtz rides with a posse to trap Darla and Angelus. But the two vampires have evaded his trap and are instead at his own house, killing his wife and two children. They taunt him with a note in their supposed hiding place: "How do you expect to stop us if you can't even protect your own."

In present day Los Angeles, Angel shares a tender moment with the very pregnant Darla, who tells him that their baby is protected by some kind of powerful forces, because she has tried to get rid of it and can't. Darla goes into labor and the crew take her to the hospital, where they commandeer a labor and delivery room and equipment in order to deliver her baby.

And in an underground lair, the being that brought Daniel Holtz back to life catches him up on the history of the world. They made an agreement 227 years earlier, when the creature visited Holtz in 1773 and told him he would never see Angel or Darla again, but that if he promised to kill them both, he would transport Holtz into the future to do the deed and finally get the vengeance he wants. Holtz agrees.

At Wolfram & Hart, Gavin Park engages in some machinations against Lilah. The exterminators he sent to the Hyperion planted bugs throughout the hotel, and he has footage of Angel (being possessed by the old man from Carpe Noctem) making out with Lilah on a desk. Lilah looks through Gavin's notes and footage and discovers that Darla is pregnant and staying at the hotel. The two lawyers join forces and alert one of the partners, Linwood Morrow, to the pregnancy, and the firm gets to work figuring out what is happening. They gather together psychics and telepaths. Their plan is to grab Darla and the baby and then dissect them to find out what it means.

At the hospital, the Angel Investigations team use an ultrasound machine to view Darla's unborn child. Wesley discovers that the child is human and a boy. A vampire cult that worships "The Miracle Child" interrupts the proceedings. Their leader says their goal is to protect Darla's child. At this point an assassin in Ninja costume leaps from the balcony, apparently intending to kill Darla and the child. The vampires make short work of him.

The vampire cult leader then says he intends to kill all of the humans and feed their blood to Darla to nourish the Miracle Child. This pleases Darla, who is very hungry.

At Wolfram & Hart, Gavin Park briefs a paramilitary team on the firm's plan to capture Darla, whom they believe is at the Hyperion Hotel. The question of how to take the child from Darla's body arises. Lilah introduces Dr. Fetvanovich, from Wolfram & Hart's Balkan office, who is an expert in paranormal obstetrics. He looks forward to dissecting both Darla and her child.

At the Hyperion Hotel, the Wolfram & Hart paramilitary team prepares for action, and Dr. Fetvanovich prepares for dissection. He has cages for both Darla and her child.

Angel drives away with the AI team and Darla. He thinks they should leave Los Angeles, but he is not sure where to go. Wesley says they should return to the Hyperion Hotel long enough to retrieve the Nyazian Scrolls.

Also at the hotel is Daniel Holtz, who manages to kill of the entirety of Wolfram & Hart's team. Angel arrives at the hotel to get the scrolls with the prophecy, and barely has he taken in the carnage and dead bodies around him before Holtz appears, ready for battle. The rest of the team waits in the car for Angel to return, but before he does, Darla's water breaks.