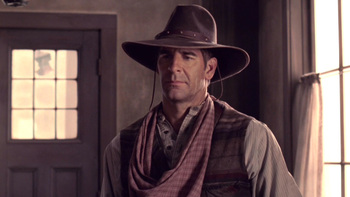 Only Enterprise would take a breather from something as threatening as the Xindi to go play cowboy for a while.
We begin in what appears to be the Wild West, where several men on horseback lynch another man, who they call a "Skag". The Enterprise, while searching for the Xindi, discovers a planet that is inexplicably populated by humans and resembles the Old West. They go to the planet and find out that the people living there were descended from some Americans who were abducted around the 1860's by a species called the "Skagarans", who then enslaved them. Malcolm, who is still on the ship, informs the others that there is a town populated by aliens ten kilometers away, so Archer tells Trip and T'Pol to explore that town while he goes to a bar. Trip decides to rent a horse and the two ride off.
Advertisement:

At the bar, Archer learns that a man named Cooper Smith liberated the humans from the Skagarans back in the day, and meets Bennings, the deputy sheriff, who starts harassing Draysik, a Skagaran waiter. Archer stops Bennings, and then the sheriff enters and asks what's going on. Bennings claims that Archer interrupted a "conversation" between him and Draysik. The sheriff, whose name is MacReady, asks why Archer is in town, and he lies that he's on his way to visit his brother. He leaves, and MacReady tells Bennings to "keep an eye" on Archer.

Archer visits a teacher who he'd met prior, and when she asks why he "barged into" her house, he replies that he wants data on the Skagarans. She says that everyone knows about them, so he claims that he lives in a northern town where none are around. He claims that he behaved that way in the bar because he believes they deserve equal treatment, and she asks if he wants to meet some more. He nods, so they head off to what's known as "Skag town" while several men, including Bennings, watch.

The teacher and Archer arrive, and she tells the Skagarans that Archer isn't dangerous. While walking through the remains of a ship, Archer spots T'Pol and Trip and introduces them to the teacher, whose name is Bethany. Bethany invites Archer to attend one of her lessons on the Skagaran language and he accepts, sending Trip and T'Pol back to the ship to get information.

At school, Bethany teaches six Skagaran children their times tables and them to describe their history to Archer. They explain that their ancestors abducted and enslaved the humans, but then Bennings and two other men named Nash and Franklin arrest Bethany. Archer tries to protest, but then he gets arrested too. In jail, Bethany explains that the humans, led by Cooper, revolted against the Skagaran oppressors, but that Cooper was "ruthless", killing civilians as well as the oppressors. She explains that he subsequently made unfair laws that, among other things, prevented Skagarans from being taught to read and write and getting married.

MacReady calls Archer to his office and claims that the laws are necessary to keep humans free. He gives Archer an hour to leave town but sentences Bethany to ten years in prison. Feeling responsible, Archer bails Bethany out of jail, subduing Bennings. They escape on horseback, but MacReady finds them and starts shooting at them. Bethany is shot, but survives, and Archer beams himself and her up to the ship.

While Phlox treats Bethany's injuries, T'Pol expresses concern over Archer using the transporter in front of the locals. Phlox also finds out that Bethany is one-quarter Skagaran. Archer calls a staff meeting, telling the other senior staff that the logs have been translated and confirm Bethany's story. He decides to make himself and his crew known, stating that the humans deserve to know that Earth has not abandoned them.

Back on the planet, Bennings tells MacReady that he believes Archer to be a "Skagaran sympathiser", since the Skagarans are rumoured to also be able to disappear into thin air. MacReady is unconvinced, but Bennings, fearing an uprising, wants to kill all the Skagarans. MacReady insists that they must uphold the law and not murder the innocent, so Bennings resigns.

Archer leads T'Pol and a security team to the planet, now in uniform, and when he leaves the shuttlepod, he explains to MacReady that he is from earth. He also tells MacReady that while he can't transport all of them back to Earth, he will send help, and that humans have outgrown bigotry, so the humans from the planet need to give it up if they want to live on Earth. Archer takes MacReady to the shuttlepod and introduces him to T'Pol. They prepare to take him to Enterprise, when Bennings shoots MacReady.

Archer tells Bennings that he is from Earth and asks to let him prove it, but another man provokes a shot from Malcolm, starting a firefight. T'Pol and Archer drag MacReady to safety, then Bennings shoots Archer, leading to a one-on-one fight in the stable. Archer wins despite his injured arm. T'Pol, meanwhile, is captured by one of Bennings's men, who threatens to kill her if Malcolm doesn't drop his weapons. However, Malcolm stuns T'Pol and then shoots her captor.

The shuttlepod returns to Enterprise, where Bethany laments on how barbaric her society is compared to Archer's, but he reassures her that they didn't progress overnight and that Bethany's society has time to change. Bethany returns to the surface and teaches her students, now joined by some human kids and MacReady, about the Wright brothers.