Radio / Pokémon: The Birth of Mewtwo 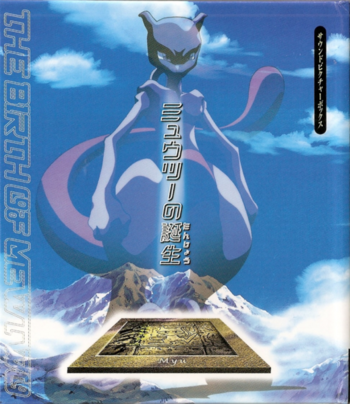 Cover of the CD release.
Advertisement:

Pocket Monsters: The Birth of Mewtwo is a radio drama meant to coincide with the then-upcoming Pokémon film Pokémon: The First Movie. It was written by the main director of of the original series of the anime (Kanto, Orange Islands, and Johto), Takeshi Shudō.

The Birth of Mewtwo was broadcast on radio over five Sundays, between June 7 and July 12 of 1998, leading up to the premiere of the film. It was later released on CD with an accompanying book. The drama is Japanese exclusive and has never been officially translated or dubbed.

The Birth of Mewtwo was later adapted into a short airing before the beginning of Pokémon: The First Movie. The initial theatrical release of the film lacked the intro however almost all future releases include it. The animated short adaptation excludes the portion about Jessie's mother and Team Rocket.

The radio drama is divided into two sections. One describes Team Rocket years prior to the series. Before Giovanni was the leader, his mother was the leader of the group and Jessie's mother Miyamoto was one of her prized grunts. The second portion tells the tale of Mewtwo's creation and his youth.

The Birth of Mewtwo contains examples of: