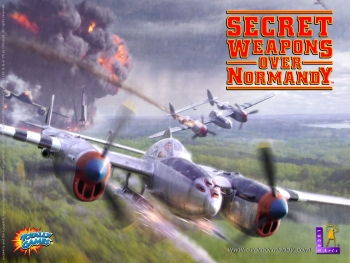 Secret Weapons over Normandy (SWON) is the 2003 sequel to Secret Weapons of the Luftwaffe, one of the first and best-known Flight Simulators. SWON was also developed by Lawrence Holland and his Totally Games! studio at the behest of LucasArts. It was released on Playstation 2, Xbox and PC.

The player takes on the role of an American fighter pilot during World War II flying for the Allied forces against the evil Nazis and their secret weapons. A wide variety of aircraft are available, from Hurricanes, Spitfires and P-40s to the XP-56 Black Bullet and the XF5U Flying Flapjack.

A fifteen-mission campaign leads the player through several major battles of the war, and includes another dozen or so shorter Challenge Missions.

In contrast to its predecessor, the Allied only campaign covers the entire war including the Pacific, the flight mechanics are greatly simplified, and more fantastic plot elements were added (focusing on a nemesis squadron in the form of Nemesis Squadron).