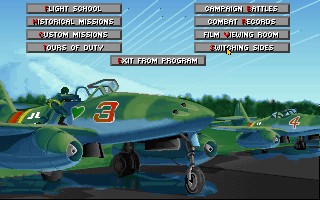 They Were Fast! They Were Deadly! They were VGA Graphics!

You have been credited with an aerial victory.

Secret Weapons of the Luftwaffe (SWOTL) is one of the first and best-known Flight Simulators developed by Lawrence Holland and his Totally Games! studio at the behest of LucasArts and released in 1991.

As the name implies, the player took on the role of a fighter pilot during later stages of World War II flying against (and in) the feared "secret weapons of the Luftwaffe." Players can fly a wide range of aircraft, from the Luftwaffe mainstays, the Bf-109 and Fw-190, to the exotic Me-262 and Go-229 jet fighters and Me-163 Komet rocket-propelled fighter; the Allied campaign supplied P-47s, P-51s, and - a rarity amongst fighter-centric flight sims - the B-17 heavy bomber.

The game combines the flight simulation with a surprisingly good strategic campaign where the player designates bombing missions and targets or manages the German war machine, overseeing production and research of aerial warfare related industries.

Also memorable for its intro and instrumental theme tune