Video Game / Shadow of the Comet 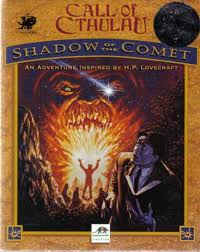 76 years ago renowned scientist Lord Boleskin traveled to Illsmouth to witness the passing of Halley's Comet... Instead, he stumbled upon the dark secrets of an evil cult. He escaped with his life, but at the cost of his sanity, and he spent the rest of his life locked up in an asylum, his findings dismissed as the ravings of a madman. Now Halley's comet is returning and photographer/astronomer John Parker is travelling to Illsmouth to uncover the truth for himself. Following the footsteps of Lord Boleskin, can he now succeed in dispelling the Shadow of the Comet?
Advertisement:

An Adventure horror game from 1993 by Infogrames, an original story based in the Cthulhu Mythos. The player assume the role of the British photographer, John Parker, who travels to the isolated town, Illsmouth in New England, on the official business of photographing Halley's Comet's 1910 passing, but he has an objective of his own: Uncovering the truth about what happened to the scientist, Lord Boleskin, who went mad when the comet passed by the town in 1834.

When he arrives, Parker stumbles upon a sinister conspiracy and must survive the three days between his arrival and the comet's passage while finding out what happened to his predecessor.

Infogrames followed up this game with Prisoner Of Ice, which, while not a direct sequel, takes place in the same universe and contains a few of the same characters. In it, players take control of Lt. Ryan, an intelligence officer in the U.S. Army a couple years before World War II. The events of Shadow of the Comet are referenced in the first Alone in the Dark, which (unlike its sequels and reboots) was also based on the Mythos.

The CD-ROM version is notable for featuring not only full voice-acting, but also coming with a mini-game titled Visit to the Lovecraft Museum, in which the player controls a nameless visitor to a Museum of the Strange and Unusual containing exhibits based on or inspired by H.P. Lovecraft and his literary work. While it plays the same as the main game, it offers very little gameplay or purpose beyond simply exploring the museum and examining what it has on display.

Shadow of The Comet contains examples of: