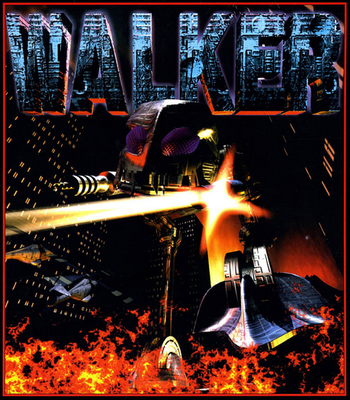 Walker is a horizontal scrolling Shoot 'em Up by DMA Design (now Rockstar North), published in 1993 for Amiga by Psygnosis, where the player pilots a giant walking tank armed with twin machine guns, which is dropped into historical battlefields where the contemporary forces throw everything they have at it.
Advertisement:

The four time periods are "Berlin, 1944" (tanks, troops delivered by trucks and railway trains, zeppelins, air strikes, commandos trying to hook lines to the Walker to climb up and mount bombs on its back); "Los Angeles, 2019", a post-apocalyptic wasteland very close to the future sections of Terminator (troops with laser weapons, robot tanks and aircraft); "The Middle East, Tonight" (The Gulf War; the enemy appears to be American forces and will bomb you with A-10 Warthogs) and "The Great War, 2420" (futuristic enemies in a wrecked Crystal Spires and Togas city). The last two could only be reached on the games' unforgivingly difficult "Arcade" mode. There was also a pre-release demo in "Constantinople, 1918" where British/French/Italian troops face you with cavalry, rifles and horse-drawn artillery.

The game is particularly notable for its control scheme - the joystick (or keyboard) is used to steer the Walker left and right (forward and backward respectively), while the mouse (or a second joystick) controls the aim and the guns (common now, but it was unusual then) and being rather graphically violent for a mechanised warfare shooter with '90s graphics: much like in DMA's earlier hit, Lemmings, deaths are rather gory, despite the tiny size of enemy soldiers cut down by the Walker's huge twin machine cannons. Everything explodes, often with screams of pain echoing in the background and there is almost no end to enemy troops. Also, in a minor note, the game is unusual in moving across the screen from right to left, while virtually all other side-scrollers go left to right.

As for why the Walker is stomping through time, that involves temporal warfare: It's the early 25th century and after three decades, warring nations Myarn and Endalion have found a new dimension to their conflict: due to the planet's "shifting polarity", time travel has become possible. Endalion, the first to realize the potential, begins to literally erase entire enemy units out of existence with its knowledge of past events. Myarn, faced with annihilation, creates the AG-9 Walker, a self-contained, energy-efficient unit, capable of traversing any terrain and powerfully armored. However, an Endalion strike destroys the Walker factory, and only one unit returns from its mission, heavily damaged. This surviving Walker is now tasked to strike at four key Endalion positions, each located in a different time and place, as Myarn's last hope...