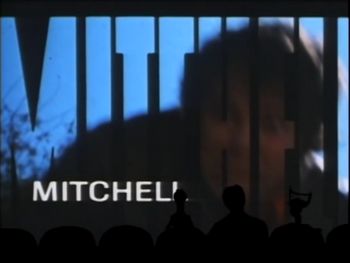 It's Bigfoot!
"My, my, my, my GOD!!"
— Crow, reacting to the squick-y love scene that accompanies the Thematic Theme Tune.
Advertisement:

On October 23, 1993, the edited-for-television release of Mitchell was featured as an episode of Mystery Science Theater 3000. Particularly mocked were Mitchell's alcoholism, slovenliness and uncouth behavior.

According to the Amazing Colossal Episode Guide, actor Joe Don Baker was very angry at the MST3K treatment of Mitchell, and threatened physical violence on any of the cast or crew should he ever meet them in person. This did not stop them from later featuring (and happily mocking) another of Baker's films, Final Justice, and hurling even more vicious insults at Baker. Kevin Murphy, who played MST3K's robot commentator Tom Servo and was one of the show's head writers, later said that Baker likely meant it in a joking manner. Mike Nelson felt that Baker was less annoyed by the episode than being repeatedly asked about it, and that his "threat" was more of an attempt to discourage reporters than directed at Best Brains themselves.

Joel Hodgson, however, said at one of his "Riffing Myself" stage shows that Joe Don Baker was approached by Shout! Factory for an interview for their DVD release of the Mitchell episode, and Baker explained that he disliked MST3K for using his real name in their jokes, instead of his character name, making the jokes seem more personal and direct. Until Baker himself goes on the record, MSTies can decide for themselves which version they find is most plausible.

This episode is notable for being the final regular episode to star series creator Joel Hodgson, as well as the introduction of his replacement Mike Nelson (who had been the head writer since Season 2, and previously appeared on-screen as characters like Torgo).

"He's such a super dude, the American dream, like the guys on the movie screen."
Joel: Mitchell!
—Joel's last line in the theater

Dr. Forrester: Of course I'll sign your time card, young man— In fact, I think you're going to be working for me for a long, long time. Push the button, Frank...
* Frank pushes the button.
Dr. Forrester: Say, Mike, what size jumpsuit do you wear?
Mike: Uhm...
Kid: You're lying through your teeth!
Mitchell: Buzz off, huh?!
Kid: Buzz off!
Mitchell: BUZZ OFF, KID!!!