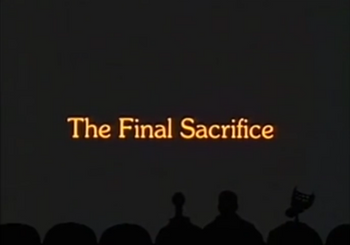 "Oh c'mon, one more sacrifice before we go?" "Okay, but this is The Final Sacrifice!"
"You know what? You lose me straight away when your movie's protagonist is named 'Zap Rowsdower'. The second I hear him identified as 'Zap Rowsdower' I am squeezing past you and climbing over your legs and muttering 'excuse me' and I am getting the hell out of the movie. Only this time I couldn't because I was at work and I'm hourly and I had used up all my vacation and sick time. How about Plink Holmgren? Or Pow Flowhauer?"
— Mary Jo Pehl, The Amazing Colossal MST3K Guide
Advertisement: