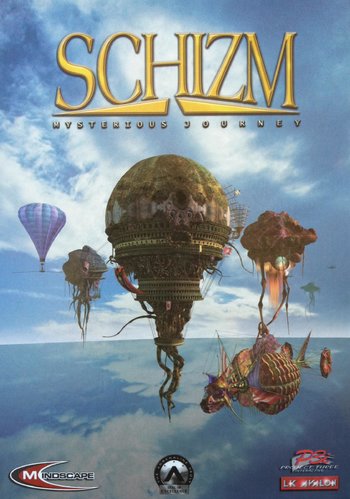 A First-Person Adventure Game of science-fictional persuasion developed by Detalion Entertainment and published by LK AVALON. Unlike most point and click adventure games, you are able to control two characters rather than one. Released in 2001, Schizm was one of the first adventure games to be released on DVD, though said release was harder to find than its 5-CD version. As obscure as it was at the time, Schizm is now available

In 2083 the planet Argilus was discovered and found to be abandoned like the Mary Celeste, with doors unlocked and machinery still functioning, but no people. The planet is thus quarantined and three science bases get established, staffed with First Contact-trained science personnel. After they lose contact with Earth, our protagonists, Sam Mainey and Hannah Grant, are sent in on the ship ECS Angel.

The Angel arrives for the first supply drop, but none of the bases respond, even though scans show their channels and systems to be working. Mainey pilots the ship closer, assuming the lack of communication is due to the planet's strong magnetosphere, but after another failed transmission, he tries to call everything off. Then the Angel's primary systems fail, secondaries don't respond, sending the ship sinking into Argilus' gravity well. So the only option left are the emergency escape pods. Mainey and Grant abandon ship and launch their pods, but the course is significantly altered and they land far apart. Which is where you come in.