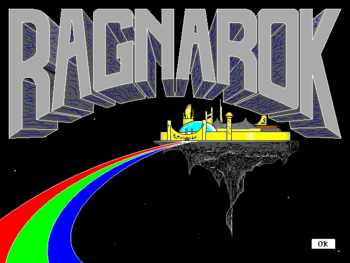 to see the European version.
Ragnarok (also known as Valhalla in Europe, not related to the earlier 8 bit game Valhalla) is a freeware Roguelike DOS game heavily based around Norse Mythology, and is notable for being one of the first Roguelikes to use graphical tiles rather than text-based graphics. Like NetHack, it has an item-heavy focus, though luck still plays an important role, especially early on in the game. How much luck comes into things will also depend partly on your playing style.
Advertisement:

As with most Roguelikes, it has a very steep learning curve and many, many ways in which you can die.

There are six classes to choose from, which you can change every 10 levels:

, though you may also need to download an MS-DOS emulator such as Dosbox to get it to run.

Not to be confused with Ragnarok Online, the Manhwa, the eponymous final battle from Norse mythology, or the 2022 God of War game.