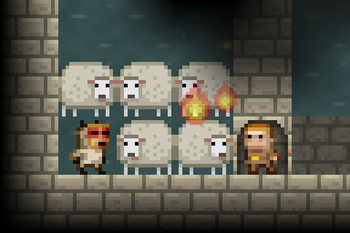 An adventurer protecting himself with indestructible sheep.
Advertisement:

Pixel Dungeon is a Hacklike Coffeebreak Roguelike, developed by Watabou. With simple controls and several fan remakes (courtesy of its open-source code), it's one of the most popular Roguelikes for mobile platforms.

The story is familiar: You are a random adventurer, seeking out the Amulet of Yendor at the bottom of 25 randomly generated levels in a dungeon.

, and the Wiki here.