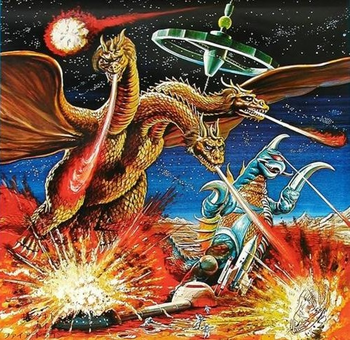 Ghidorah (L) and Gigan (R): More evil than your average Kaiju.
Mas Selina Salno, Princess of Sergina: Why does no one pay heed to my warning? The entire human race will perish from the Earth. When the monster Ghidorah passes, only flaming ruins are left.
Detective Shindo: Ghidorah?
Salno: Centuries ago, the monster appeared in the skies of Mars. Within a month, the culture of Mars had been wiped out completely. The civilization on my planet had reached a stage of development which you people will not achieve for a long time. Centuries, at least. Today, because of the space monster, it is a dead world. Dead and unpopulated.
Dr. Tsukamoto: It would be a bad situation if that creature came here to Earth.
Salno: It's worse, because he's arrived.
—Ghidorah, the Three-Headed Monster
Advertisement:

Toho is famous for its kaiju movies, and Godzilla is perhaps the best known. These films are are more associated with special effects and giant monster battles than with depraved villains. However, there are some villains who manage to cross enough lines to stand out from the crowd as truly, utterly, and irredeemably evil.

Entries in each folder are by release/publication date.