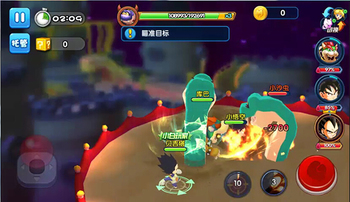 The gameplay is as follows: You build a team consisting of up to five fighters, with one assigned as the leader you can control, two assigned as your primary companions controlled by the AI, and the other two being your backup companions that can be swapped with the primary companions (limited by a cooldown timer). You move your leader character via on-screen controls: The "control stick" on the left controls movement, the Big Red Button on the right unleashes your character's basic attack, while the smaller unique buttons surrounding the basic attack button are your character's skills (plus an auto-aim functionality), each having its own cooldown timer that shows up each use, with said cooldown timer having longer time the more powerful a skill is. Like in the official Super Smash Bros. games starting from Brawl, every playable fighter has a Final Smash that requires charging before it can be used. To unleash a Final Smash, tap a fighter's icon when it glows. Companion allies have their Final Smash activated manually like the leader. To swap out companions with the backup, tap the upper right button depicting your backup allies. While on standby/backup, the swapped out allies will slowly recharge their health until they're swapped in again. In the main campaign, a stage's main objective is to defeat a boss (either a Giant Mook or an enemy version of a playable fighter), though your stage progress is impeded by the presence of enemies that must be defeated first before the game allows you further progress. Aside from that, the game is built using a generic mobile MMORPG template featuring Microtransactions, set of daily events, and basic features like the "guild" system, Boss Battle mode, gacha feature, etc.

Like Pocket All-Star Smash Brothers, this game didn't last long. Its servers had been shut down since February 15, 2017, about a month after Pocket All-Star's shutdown.