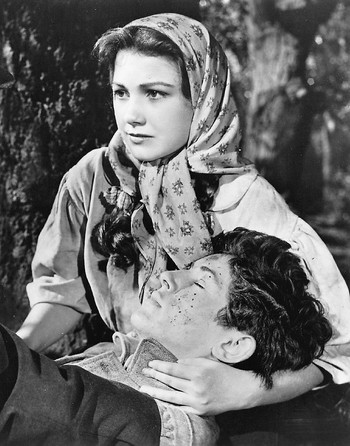 The North Star is a 1943 Hollywood war drama film, directed by Lewis Milestone, produced by Samuel Goldwyn, and written by Lillian Hellman. The film is a rare example of American propaganda on behalf of the Soviet war effort during World War II, and the story is set in the then-Soviet Republic of Ukraine during the summer of 1941. As expected, it doesn't end well for all involved.

The titular "North Star" is a small hamlet in Ukraine, possibly connected to a collective farm, and the movie begins at the end of a school year and the beginning of the summer hiatus. Three students at the local school are granted a scholarship, and are allowed to take up studies in Kiev. We follow the three, Marina (Anne Baxter), her boyfriend Damian (Farley Granger), and her best friend Clavdia (Jane Withers), while they prepare for this, all looking into a shiny, bright future— if only. The small party has only just gotten on their way when news arrive that the Barbarossa is launched with German troops breaching in from the west. Thus, their every hope of getting to Kiev is shattered, as the problems at hand come crashing down on them.

During the movie, all the townsfolk take up arms in different ways and resort to guerrilla warfare, or they simply burn down the village after the "Scorched earth" model. Damian's older brother Kolya (Dana Andrews), an officer in the Soviet air force, is the first to take the lead. The last part of the movie shows a heroic effort by the core gang, helped by Karp (Walter Brennan), an Old Soldier from WWI, to get a cache of guns to the home front. The confrontations with the Germans are harsh to say the least, and the ending is determined, bittersweet, with Marina as the only one alive and well, but visibly hardened by her recent experience.

For other examples of American pro-Soviet propaganda during World War II, see Days of Glory and the truly odd Mission to Moscow.

Tropes to be found in this movie: