Film / None but the Lonely Heart 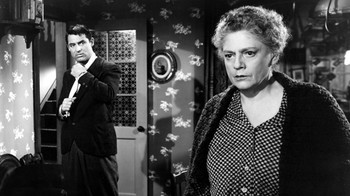 None but the Lonely Heart is a 1944 drama film written and directed by Clifford Odets, based on the 1941 novel of the same name by Richard Llewellyn.

Ernie Mott (Cary Grant) is a drifter who makes a life out of wandering around everyplace, being determined to avoid settling down and having obligations and responsibilities. He has come back home to a poor section of London to visit his mother, Ma Mott (Ethel Barrymore), who ekes out a meager living as the owner of a store dealing in second-hand goods. Ma disapproves of Ernie's itinerant lifestyle and tells him so. Ernie is about to leave town again on bad terms with his mother when a family friend delivers some terrible news: Ma is dying of cancer.

Ernie stays home with Ma without revealing that he knows of her condition. Old acquaintance Aggie Hunter (Jane Wyatt) makes it perfectly clear that she's in love with Ernie and wants him to marry her, but Ernie prefers Ada Brantline, who works at the amusement park. After finding out that Ada used to be married to local crime boss Jim Mordinoy, a bitter Ernie breaks up with her, and joins Jim's gang. Meanwhile, Ma, who wants to leave something to Ernie, makes the rash decision to cooperate with a gang of thieves in the fencing of stolen goods.