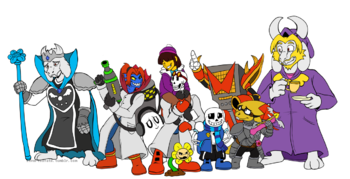 * Still, much has changed.
Q: What is Inverted Fate?
Flowey: A VERY interesting mistake...
— FAQ

With a style that mixes sprite work in the style of the original game with the occasional drawn comic, the story follows the events of the True Pacifist route on the original game, but assuming that Flowey was successful in his plan of resetting the timeline, though not exactly as he expected. Waking up with his memories but with none of the powers he had by the end of True Pacifist, his meddling unintentionally created a new world in which the roles of the six main monsters have been changed, bringing with it some significant changes to the Underground.

Now in an unknown world, with the knowledge that his original plans won't do him any good, and with the human on their way, Flowey decides to take on a different "friendly" approach with the human to see just how much has changed, and if he can find a way to fulfill his plans with no mistake.

While taking inspiration from other role swap fan works like Storyshift, Inverted Fate takes a different approach to its role swaps by only shifting the roles of the six main monsters while keeping them true to their original character, and shifting its focus from sticking from the original events of Undertale with different characters in other's shoes, to showing the consequences that changing the roles of these wildly different main characters can have on the other characters, the world, and the story as a whole, all while the original events remain on the horizon.

As a result of this, changes are seen such as the Ruins becoming a lively garden open to all monsters under Asgore's care, Papyrus becoming the eager lab assistant of the now Mad Scientist Undyne, Sans successfully becoming one of the elites of the Royal Guard despite his utter laziness, the Underground as a whole taking on a much more wary disposition against humanity, Toriel and Alphys are the Queen and Captain of the Royal Guard respectively and Frisk taking on an active role on the events of the story now that they're not bound by the control of a player anymore.

Inverted Fate is uploaded on the blog of the same name

. The story in chronological order can be read here

. In addition, an official roleplaying blog is found here

. An official animated comic dub is also in production and can be found here

, and playable versions of some of the fights

Due to the nature of the story, Undertale spoilers are unavoidable.