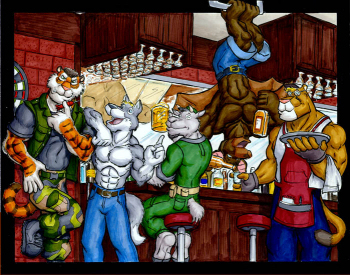 is a completed gay-themed furry comic book series by artist Vince Suzukawa. A follow-up to his long-running webcomic The Class Menagerie, it also follows the lives of characters at the fictional DeMontfort University. However, it is not a sequel; though i.s.o. even takes place in the same dorm as the former series, it focuses on the residents of a different floor of the building. Likewise, while TCM shows events through the eyes of several characters, i.s.o. concerns itself primarily with a tiger named Cody Frost, a freshman at DeMontfort who struggles with his new relationships, his homosexuality, and his desire to be "normal."

The comic was published semi-annually; ten issues of the comic book have been published. The title is an acronym commonly used in personal ads, meaning "In Search Of". It also refers to the Greek prefix ἰσο- (iso-), meaning "equal" or "normal."

There is also a spin-off sort of thing (which may or may not be canonical) written by Vince's fiance. Set after the events of ISO it's about Cody meeting his uncle and cousin from Russia for the first time. It's called From Russia With Lust

. Vince has no plans on seeing it published and since it's just something that Vince does when he has time to kill, it's the sort of comic that'll get done when it gets done. It's been several months since the last update.