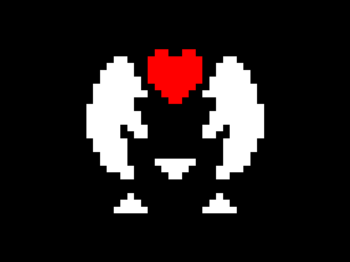 WARNING: DUE TO THE NATURE OF THIS COMIC, THERE ARE UNMARKED UNDERTALE SPOILERS AHEAD AND ON THE OTHER PAGES.

is a piece of Undertale fanfiction by voltrathelively that asks the question: What if the characters changed places? To answer this, it shifts the ten main characters (Asriel, Napstablook, Toriel, Sans, Papyrus, Undyne, Alphys, Mettaton, Asgore, and Chara) into each other's roles, potentially going to go several times with different assignments to each role. note The characters here are referred to by the format X!Y, where Y is the character's name, and X is the character they're replacing. For example, Undyne!Toriel refers to the first loop's Toriel, who replaces Undyne.

As of April 19th, 2017, Voltra has announced that Storyshift is under hiatus

due to people leaking talk about a reboot. It was later confirmed/reiterated

that the AU will eventually return with said reboot, revamping the story, character designs, and area layouts. The reboot is currently in progress, and the parts currently uploaded can be read via Google Docs (links can be found on the Tumblr blog) or on Archive of Our Own

NOTE: Only tropes that apply to this fanfic's divergence from canon (eg. events, character designs etc.) should be cataloged here.