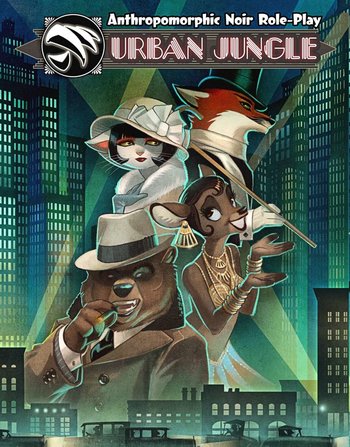 That art style looks familiar...
A Film Noir-styled RPG of anthropomorphic animals from Sanguine Games, the makers of Ironclaw and featuring a version of the same Cardinal system.
Advertisement:

The game world described within is similar to our own world from the 1910s and 1940s with a few differences, aside from the species of the inhabitants, mostly in the names of the people and places.

Players might be hard-boiled private eyes, intrepid reporters, or even gangsters. It's all up to you.

The core book came out in September 2016. A supplement for horror and supernatural campaigns, "Occult Horror," was published in May 2018. In May 2021 another supplement, "Astounding Science," came out for campaigns based on sci-fi serials.