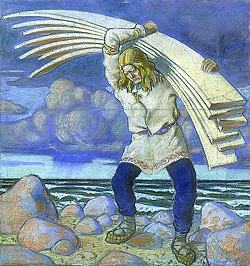 Kalevipoeg is the Estonian national epic, reconstructed out of folklore in the 19th century. The work was started by Friedrich Robert Faehlmann and finished after his death by Friedrich Reinhold Kreutzwald. After some problems with censorship as Estonia was, at the time, under the rule of Tsarist Russia, it was published between 1857 and 1862.

The story centers around the hero, called Kalevipoeg (literally "son of Kalev") one of the sons of Kalev, the legendary king of Estonia. After his father's death, he wins several competitions for the crown against his brothers and takes his father's place as the king. The poems go on to describe his life and deeds up until his death (and a little bit after it too). There are travels to distant lands and even the underworld, wars, romance, betrayal, revenge, alcohol, all the fun stuff.

Added Alliterative Appeal in the original language. Translations maybe not so much.

See also The Kalevala, the Finnish epic that has some common mythological background.