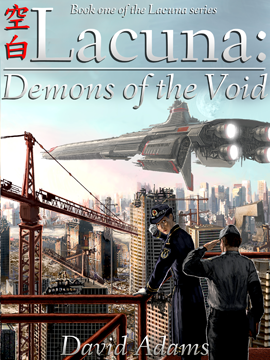 It's basically BSG with Chinese people. And the aliens from Wing Commander.
This story is less a love note to TV Tropes and more a proposal of marriage.
— Word of God
Advertisement:

Lacuna is a hard science fiction story series set 20 Minutes in the Future by David Adams, with the first being "Demons of the Void"

. The plot of the first novel centers around aliens arriving and blowing up three cities on Earth, so Humanity builds three starships to go out into space with the aim of finding out why, and preventing it from happening again. Primarily told through the eyes of Captain Melissa Liao and her ship, the TFR Beijing.

Author is a troper and the work contains many shout-outs to TV Tropes and assorted tropes by name.