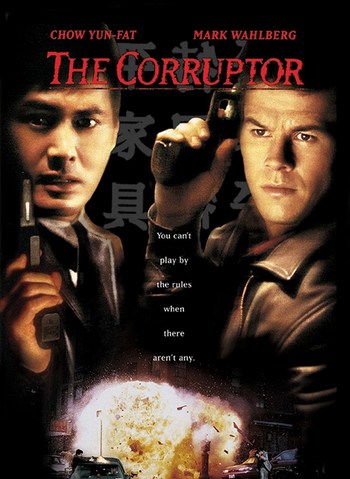 You can't play by the rules when there aren't any.
Advertisement:

The Corruptor is a 1999 action crime thriller film starring Chow Yun-fat and Mark Wahlberg. Much of the movie pays homage to Chow's old-school Hong Kong movies, especially those in the Heroic Bloodshed genre.

Nick Chen (Chow) is a NYPD Lieutenant leading the Asian Gang Unit in Chinatown, but is secretly working as informant for triad leader Uncle Benny. When Detective Daniel "Danny" Wallace (Wahlberg) is transferred into the same unit as Nick, both men had to work together to take down the powerful Fukienese Dragons gang, led by Bobby Vu (Byron Mann). But complications ensues when Danny finds out the truth behind Nick's corruption.