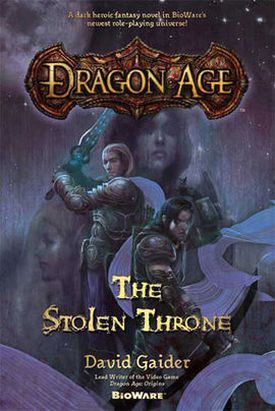 Dragon Age: The Stolen Throne is a prequel novel to the BioWare RPG Dragon Age: Origins written by its lead writer, David Gaider. The chronologically earliest installment of the Dragon Age franchise, it follows the Fereldan king Maric Theirin, as he rises from awkward and foolish boy to the deserved and rightful king of Ferelden.
Advertisement:

However, that throne is occupied by King Meghren, the usurper. He is the cousin of the Orlesian emperor, and rumored to have also been his lover, exiled from Orlais for his antics. His servant and advisor, the mage Severus, hires an elven Bard (assassin and spy) named Katriel to seduce and betray Maric, but she begins to develop feelings for the rebel leader.

Also prominent is Loghain Mac Tir, one of the main villains of Origins. As Maric's best friend and most trusted subordinate, he finds himself torn between that loyalty and the love for Rowan, Maric's betrothed since birth.

Tropes in this novel are: