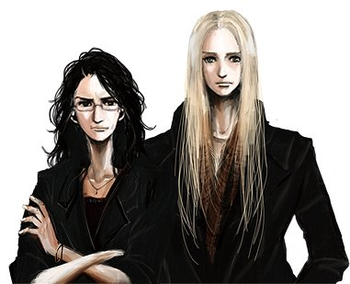 All I had to do was say "I love you..." and she killed my piece of shit husband for me. Stupid lesbian.
—The Brunette
Advertisement:

The most common Yuri story follows a rather simple formula. Two schoolgirls fall in love, their relationship dynamic is built around being different ages and the worst thing that could happen is being called mean names (at least in modern yuri stories for the most part). Gunjo however, is not the common yuri story at all.

Written and drawn by Nakamura Ching, Gunjo tells the tale of two adult women on the run from the police. They killed a man. To be more specific, the Brunette told her Blonde lesbian friend that she loved her and asked her to kill the Brunette's abusive husband. The Blonde did and, for some reason, the Brunette opted to help her friend avoid the police. Their relationship together is anything from the typical one seen. It is abusive, unstable and obsessive. Gunjo is very blunt about this fact.

Gunjo is certainly not a series for everyone, but it is one to investigate if one is looking for a different sort of yuri.

After years of failed attempts, it received a Broad Strokes Netflix live-action film adaptation called Ride Or Die, which premiered on April 15, 2021.