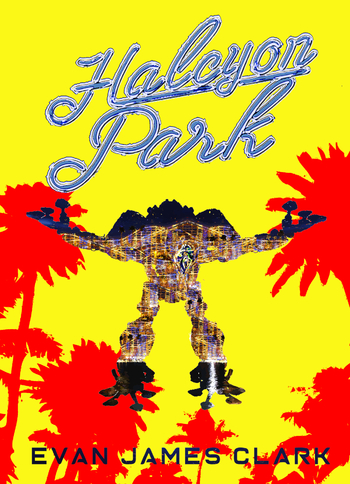 Halcyon Park is a 2018 science fiction novel by Evan James Clark. It follows Archie Robledo, a former Army engineer turned cyborg by a top secret project to create the next generation of super-soldier. When the unstable government administration shuts the project down, Archie is unceremoniously cast out into a near-future USA where technophobia is rampant and the cybernetics that keep him alive are federally banned.

Effectively a non-entity in the eyes of the law, Archie lives off-grid, hiding among family members and relying on underworld contacts. Eventually, his engineering skills get him a job at Halcyon Park, a slowly failing boardwalk amusement park and “robot zoo” run by a washed-up robot boxer and a crew with just as many legal troubles as Archie. When the park takes a financial nosedive, threatening to expose the shady dealings of the management, Archie turns to the only other trade that might save them: bank robbery.