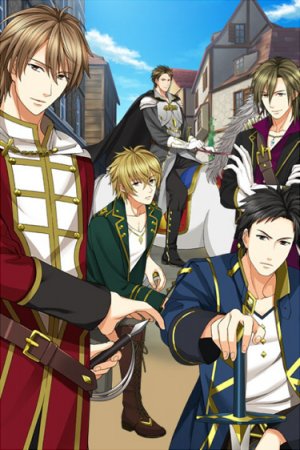 A Knight's Devotion is a Romance Game Visual Novel by Voltage, Inc. for iOS and Android devices. A Westernized adaptation has also been released by Voltage Entertainment USA under the title Knight of My Heart.

The game takes place in the fantasy kingdom of Rapier, where the protagonist has grown up as a simple village girl raised by her grandmother. When strange men in black robes attack her village and she is rescued by a group of royal knights, she learns that she is actually the daughter of the king, raised in secret in order to ensure her safety. Now she is of age and the king has collapsed, and these five knights have arrived to take her back to the palace in order to assume her role as princess.

Someone, however, has an interest in making sure that she never makes it there, and with the men in black robes a constant threat along their route to the palace, the protagonist must choose one of the knights to be her personal protector in order to make sure she makes it out of the situation alive.

A Knight's Devotion contains examples of the following tropes: