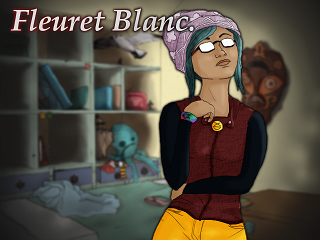 "Everything is collectible."
"Mightier than the sharpest pen. Tool and temptress. A fleuret blanc is both possession and owner."
Advertisement:

Fleuret Blanc is a Visual Novel made in RPG Maker XP by Merlandese. Originally made in 2012, it gained another surge of popularity when posted to rpgmaker.net two years later.

23-year-old Florentine Blanc is a college graduate who has dedicated her life to travel. Without having a career to fall back on, she takes up menial jobs whenever her pockets become empty. She seems to strike gold when she gets accepted into FOIL, a private fencing organization looking for members interested in a "new breed" of the sport.

The rules? Members of FOIL must wager their most prized possession in the world. This object acts as a trophy winnable by other members of the group. After seven days of bouts, the judges decide who Florentine replaces as the new member. In the meantime, Florentine decides to investigate FOIL's mysterious and secluded base of operations. As her experiences become more menacing, she encounters troubling questions and begins to discover what evolves into a mysterious and ugly truth.

Notable for its discussion of many heavy themes such as materialism and obsession, Fleuret Blanc has gained popularity as a literary and story-heavy experience, albeit not without some engaging gameplay elements. It can be downloaded here.

"We are, each of us, a collection of mistakes."