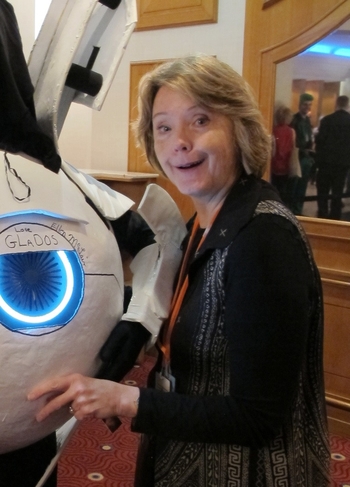 (born December 1, 1952) is an operatic soprano, stage actress, and voice-over artist, who is most famous in the latter field for her work with Valve, and in particular for her portrayal of GLaDOS, the Breakout Character and Fountain of Memes from the Portal series.

She is married to John Patrick Lowrie, also a voice actor who has done extensive work with Valve, and it was him who encouraged her to get into voice-over work. Her theatre training and singing ability made her perfectly suited to play the character of GLaDOS, a role which brought her great praise.

In addition to continuing to work in theatrical productions, she is now a permanent member of the Valve repertory, having appeared in all of their games since Half-Life 2. Surprisingly, and despite her popularity and critical acclaim, she's done little voice acting outside of her work with Valve.

for Portal is a great listen, and forever endeared her to the game's fanbase. Also, a very good full-length interview can be found here

. She performed her two Portal songs, "Want You Gone

", live for the very first time at the Midwest Anime Convention on July 16, 2011, accompanied by Lowrie on banjo, with the two of them leading a sing-along

the following day. She has also written and performed a song for GLaDOS

She and Lowrie have been far more active in the convention circuit as of late, appearing all over the United States (and even in the UK) since the summer of 2011. McLain continues to appear in Video Games, and is gradually spreading her wings beyond Valve; it has been confirmed that she will appear in the new game by the creators of Space Quest (along with Lowrie) due to their sharing the same agent.