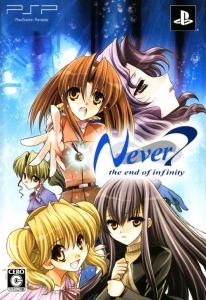 The first game in the Infinity series.

Makoto Ishihara is a college student who rarely attends his classes. As a result, after finals, he is sent, along with three other students (Yuka Kawashima, Haruka Higuchi, and Okuhiko Iida) to a "Seminar Camp" on an island far away for a week during spring break as punishment. However, Makoto has a dream where, on April 6th, a girl dies before his eyes, a bell clutched in her hand. He wakes up from the dream to find out that it's April 1st.To make things even stranger, however, Makoto begins having premonitions of future events, each one turning out correct. As he wonders just what is going on, things grow even stranger as the week goes on...

This game was notable for being released in three different forms. The first release, Infinity, was released for the PS1, and only contained the first five routes. The second release, Infinity CURE, was released for the Neo Geo Pocket, and contained two routes: Izumi Curé (the sixth and final route) and the story "Yuka Curé" (Yuka's Route from Yuka's own point of view, added into later versions of the game). The third and final release was Never7: The End of Infinity for the Dreamcast, and contained all six routes. This release was later ported to PlayStation 2 and PlayStation Portable.

A Fan Translation was released

in 2020. It's still being developed, but is already fully playable.