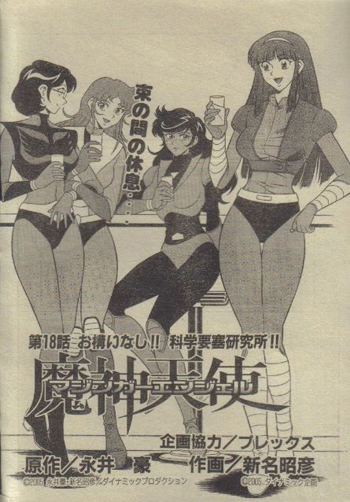 From Left to Right: Hikaru, Maria, Jun and Sayaka
Advertisement:

Mazinger Angels (マジンガーエンジェル, Majinga Enjeru) is a Humongous Mecha manga series. It is both a Crossover of the Mazinger series and a spoof of Charlie's Angels. Written by Go Nagai and drawn by Akihiko Niina, it was originally published in Kodansha's Magazine Z, starting in 26 June 2004 (#2004-08) and ending in 25 November 2006 (#2007-01). It was compiled in four tankōbon. A sequel was released in 26 December 2007 in Magazine Z as well, called Mazinger Angels Z (マジンガーエンジェルZ), which features the original designs for Mazinger Z and Grendizer, called Energer Z and Gattaiger, as well as Kikunosuke Abashiri from Abashiri Ikka. It was compiled in two tankōbon.

20 Minutes in the Future, technology is advanced enough to fabricate humanoid robots. Most of them are relatively tiny and used for mundane tasks like security service, but some of them are used to commit crimes. Sayaka Yumi (from Mazinger Z), Jun Hono (from Great Mazinger), Hikaru Makiba and Maria Grace Fleed (from UFO Robo Grendizer) are members of a secret organization / private investigation agency investigates and solves crimes related with mechas and cyborgs. Each one of them pilots a Humongous Mecha to fight back the giant robots they run into during their cases: Aphrodite-A, Venus-A, Diana-A and Minerva-X. Their identities are kept secret and the general population only knows their team's name: the Mazinger Angels.

As they solve case after case, Sayaka and her team start suspecting most of them are linked: someone is backing several criminals, psychopaths and miscreants with mechas for furthering some sinister purpose. A person perfectly willing destroying whoever stands in his way. And they are standing in his way...

Mazinger Angels is noteworthy because the cast is exclusively formed by the female main characters of the Mazinger series. They were several of the first Action Girl in anime, but several storylines in the original series involved scenarios where The Hero had to save or rescue the Action Girl to show how badass he is. Here they never show up, so the female leads are free to show their badassery without getting dragged down with Faux Action Girl or Distressed Damsel scenarios or being Overshadowed by Awesome.

This series also highlights the sex appeal of both the characters and the mechas, sometimes similarly to the way Agent Aika's shows the female characters.

Most recently, two original soundtracks were released as part of the series. They contain several new original melodies for the series, including a TV-sized main theme of Mazinger Angels, as well as several musical arrangements of melodies from several series of Go Nagai, including all the Mazinger related series and several other anime TV series such as Devilman and Dororon Enma-kun.