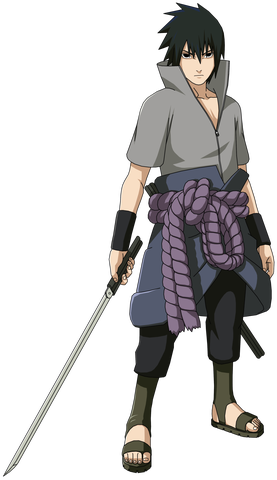 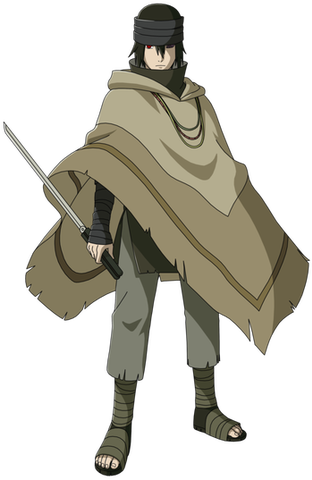 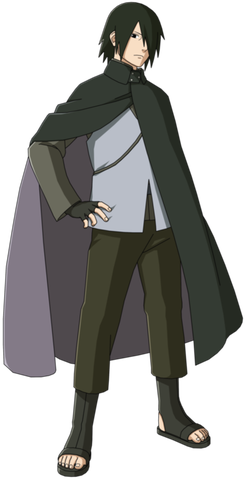 I hate a lot of things, and I don't particularly like anything. What I have is not a dream, because I will make it a reality. I'm going to restore my clan, and kill a certain someone.

Sasuke Uchiha is Naruto's rival and The Lancer of Team 7, a prodigy who possesses the power copying Sharingan bloodline limit; he is also the father of Sarada Uchiha in Boruto. He's one of the last remaining members of the Clan, who were mostly murdered by his Aloof Big Brother Itachi in a single night. Since the incident, Sasuke focused himself to acquire enough power to kill Itachi and avenge the clan. Initially a loner and so-not-a-team player, Sasuke develops a grudging respect for Naruto. He eventually grows jealous of the possibility of Naruto outshining him, and abandons Konoha and heads off to join Orochimaru, who desired his Sharingan. Not even an epic battle with Naruto could change his mind.

In Shippuden, he returns, stronger than ever, and now knows of the Nine-Tailed Fox inside Naruto. He disposes of Orochimaru, forms a team of the latter's old captives and associates, calling the team "Snake" (Hebi), and finally faces his brother in battle. However, Tobi, the true leader of Akatsuki, reveals the tragic truth behind the Uchiha Massacre and that the object of his revenge was just as much a victim as Sasuke was. To that end, Sasuke renames his team "Hawk" (Taka) and changes his revenge to wiping out the village of Konoha. Along the way on this new path, Sasuke becomes much darker and ends up having a bounty be placed on his own head for trying to assassinate the man who orchestrated the massacre in the first place, Danzo.

He finally succeeds in killing Danzo but his newfound hatred overwhelms him, alienating even his most devoted followers, (Karin, Konoha 12, Kakashi, etc.) leaving only Naruto as the one person who still wants to save Sasuke. Later Sasuke takes Itachi's eyes in order to save himself from blindness and obtain new powers. Through fate and chance, Sasuke once again meets up with his brother Itachi, brought back by Edo Tensei, and together they manage to stop the caster of the technique, though not before Itachi manages to change Sasuke's mindset from mindless revenge and get him to start thinking for himself instead of always allowing himself to be influenced by others. He also apologizes for the pain he put his little brother through.

After reviving Orochimaru and enlisting his help in bringing back the four original Hokages, Sasuke learns of the origins of the village and resolves to protect the legacy his brother left behind by becoming the next Hokage. To this end, Sasuke leaves for the battlefield to face off against Madara and the Ten-Tails. Through many hardships, Sasuke gains half the power of the Sage of the Six Paths and helps Naruto in the fight with villains. It is then that Sasuke reveals his plans of bringing about "revolution" by murdering the five Kage and taking on all the world's hatred for himself, thereby uniting the villages and the world through fear and anger; his definition of being "Hokage". Naruto notes the stupidity of this idea, stating that he learned nothing from Itachi and resolves to end their feud once and for all.

Ultimately Naruto wins their final clash and finally redeems Sasuke, causing him to let go of all his hatred. As penance for his actions, he resolves to travel the world to prevent another incident from happening again. Along the way, he also returns Sakura's feelings, get married and together they have one daughter, Sarada Uchiha.