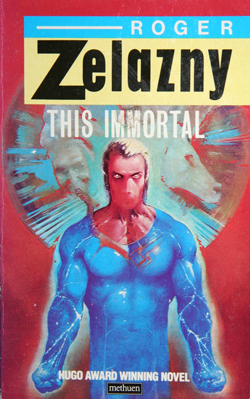 "Nothing is cheaper than past glories."
— Conrad Nomikos
Advertisement:

This Immortal, originally serialized as ...And Call Me Conrad in 1965, is a Science Fiction novel by Roger Zelazny. In 1966, it won the Hugo Award alongside Frank Herbert's Dune.

It is set on an Earth that has been mostly abandoned by humans after a nuclear fallout. This turned most of the planet's landmasses into Hot Spots, displacing what's left of humanity to the coastal regions and islands, with the majority of the human population living and working off-planet under the wing of the Vegan Combine centered around Vega. The Vegans themselves, having never seen a destroyed civilization before, treat Earth and humanity as a museum and vacation spot, building resorts and touring Earth's remaining historical sites.

The story centers around Conrad Nomikos, Comissioner of Monuments, Arts and Archives on Earth, who is asked by the Office — the closest thing Earth retains to a functioning on-site government — to take a Vegan journalist named Cort Myshtigo on a tour around Earth. They are joined by a group of people close to Conrad, all for their own reasons, but soon it becomes apparent that someone within that group wants to see Myshtigo dead. It is up to Conrad — himself a mystery to many people — to uncover who plans to kill Myshtigo, whether the journalist is truly just writing a travel guide to Earth, and whether to try to preserve his life or stand aside.

This Immortal contains examples of:

Alternative Title(s): And Call Me Conrad