"(To Giles on the phone) I just talked to Buffy, and yeah, I think she's feeling a little ... insane. No, not-not bitchy crazy, more like homicidal maniac crazy. So I told her to come see you, 'kay?"
—Willow Rosenberg 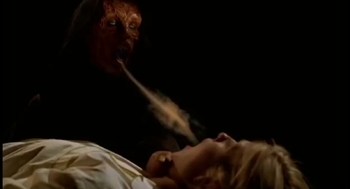 Buffy is in her dorm room in Stevenson Hall at the UC Sunnydale campus. Buffy's roommate Kathy Newman is cheerfully ironing her jeans while listening to Cher's "Believe." Buffy, needing to patrol, tells Kathy that she is heading out to The Grotto to get some caffeine. As Buffy leaves, Kathy informs her that she has devised a system to keep track of calls so that they can be properly billed. She has also noticed that some of her milk was missing from the mini fridge. Buffy owns up to taking some milk for her coffee. During the conversation, the Cher song ends and Kathy quickly runs to the CD player to restart the same "super fun" song.

Buffy meets up with Willow, who notes that Buffy is having trouble getting past Kathy to patrol without getting lots of questions asked, then leaves to see Oz. As Buffy is patrolling, Kathy jumps out onto the path, claiming she decided to join Buffy at The Grotto.

Suddenly, Buffy is attacked by an orange-skinned, glowing blue-eyed demon. Before Kathy can see what is happening, Buffy shoves her into the shrubs. Buffy fights off the demon, and when Kathy climbs out of the bushes complaining about her sweater being ruined, Buffy explains that someone tried to take her backpack. As they leave, they are watched by two of the same type of demon that just attacked; one comments, "She may be the one."

The next morning, Buffy goes to Giles' flat to describe the previous night's monster. Buffy's atypical interest in what Giles has planned for the day arouses his suspicion, and when pressed she admits she is avoiding her dorm room until Kathy leaves for classes. As Buffy talks to Giles, Kathy is in the dorm room scrubbing the grass stain on her sweater. She spies Buffy's closet and takes a look inside. She finds a sweater that she likes and removes it from the closet. As she does this she notices Buffy's weapon bag, pulls out a crossbow and a cross, at first looking shocked and then shrugging at such bizarre equipment.

At the Rocket Cafe, Buffy is in line when she spots Kathy. She quickly ducks behind another patron - Parker Abrams, who introduces himself and strikes up a conversation about how to maximize her dining hall card. Buffy joins Willow, Oz, and Xander, remarking that Xander is the odd man out since he is not a college student. The group discuss the encounter with Parker (Buffy says it was just "random adorableness"), and the previous night's demon attack. Buffy is annoyed when Kathy - wearing Buffy's sweater - invites herself to their table. Kathy remarks that since Buffy ruined her sweater, she didn't think that she would mind. "Besides, we're practically sisters," she says, "now that we live together." As Kathy takes a bite of her burger, Buffy watches intensely as ketchup drips onto her borrowed sweater.

That evening, Buffy complains to Willow on the phone about Kathy. As Kathy enters the room Buffy hangs up and Kathy quickly reminds Buffy to log her calls, then proceeds to loudly floss her teeth. Buffy goes to place an apple in the mini-fridge. Upon opening it she is stunned to find everything is now labeled with Kathy's name - including each egg. Kathy gets up and shuts the window on Buffy's side of the room. Buffy immediately goes back and opens it. Kathy picks up her book and finds it is stuck to the table with a wad of chewing gum. Buffy, who is at the moment chewing gum, swallows it while denying that she knows anything about it. Both angrily turn out their lights and go to sleep.

Buffy dreams of an orange, blue-eyed demon pouring blood down her throat, putting a scorpion on her stomach and sucking a glowing essence from her mouth. She awakes the next morning to find Kathy staring at her and is asked if she "always makes that much noise" while she sleeps.

At school Buffy describes the dream to Willow, Oz, and Giles. Kathy again sneaks in to the group and overhears Giles talking about analyzing dreams. Kathy remarks that she had an odd dream and describes the same dream as Buffy had. Buffy and Kathy spar passive-aggressively as Buffy tries to get Kathy to leave. Buffy asks Kathy if she shouldn't be getting to class, and Kathy remarks that her schedule is off since someone kept her up all night. Kathy leaves and Buffy complains to the group. After Buffy leaves, Giles blames the dream on the previous night's encounter with the demon and everyone expresses concern about how stressed Buffy is acting.

That night the two demons meet again and one confirms that "she is the one." The group chants around a large fire, preparing to summon "the great Taparrich". Buffy walks into their dorm to find Parker and Kathy chatting on Kathy's bed as Cher's Believe plays once again. Parker nervously gives Buffy some Ziploc bags to aid her cafeteria hoarding skills. Kathy horns in again. Buffy get annoyed and snaps at them. Parker leaves with a promise to meet up with Buffy again another time.

More passive-aggressive battling ensues. Buffy puts a lock on her closet while Kathy starts with the loud flossing. Buffy opens the window and Kathy complains that she is cold. Buffy tells her to deal with it and they argue. Finally when Kathy calls Buffy spoiled and says "It's share time," Buffy goes to the fridge, takes Kathy's marked milk and gulps it until its flowing freely out of her mouth all over the floor. Willow and Oz are walking back to Willow's dorm room discussing Buffy's odd behavior. Oz offers to watch Buffy by patrolling with her. As he walks outside to find Buffy he passes an unknown woman, and shares an intense look with her. Oz finds Buffy and she describes the argument she had with Kathy. She gets so upset that she smashes a bench.

Back at the dorm, Kathy is cutting her toenails at the end of her bed, letting the cut pieces fly everywhere. Buffy, annoyed, starts tapping her pencil loudly; Kathy drowns her out by turning on the CD player to hear her favorite diva singing Believe. That evening Buffy has the same dream again. When she wakes up in the morning Kathy is tossing and turning as if she too is having another nightmare.

A little later Kathy is in the dorm hallway complaining to Willow about Buffy. Buffy approaches and Kathy makes a quick exit. Buffy tells Willow seriously, "Kathy is evil. I'm an evil fighter. It's simple. I'm gonna have to kill her." Buffy holds up a Ziploc bag filled with toenail clippings, which she says she collected the previous night and measured. When she measured them again in the morning, they had grown - "That's a demon thing." Willow convinces Buffy to ask Giles about Kathy being a demon, and then calls Giles to warn him about the strange behavior.

Buffy goes to Giles to show him the toenails and is ambushed by Xander, Oz, and Giles. They drop a net on her and tie her with ropes. Giles believes that Buffy is possessed by the demon from the encounter in the woods and goes to gather supplies for a spell to end the possession.

Tied-up Buffy tries to convince Oz and Xander that Kathy is evil and needs to be stopped. They worry that they didn't tie her up well enough and when they go to check, Buffy smashes their heads together and knocks them out.Buffy returns to her dorm room and finds Kathy there. They decide to "talk." Buffy "accidentally" kicks Kathy's throw rug out of place and Kathy responds by punching Buffy in the face. They fight and Buffy rips off Kathy's face to find that she is an orange, glowing blue-eyed demon! As this happens the two demons in the woods summon Taparrich using the Ritual of Mok'tagar. Simultaneously Giles realizes that Buffy was right, using the toenail clippings as evidence. He tells Willow, Oz, and Xander that the Mok'tagar are trans-dimensional demons and the ritual Buffy described in her dreams is used to steal someone's soul. Mok'tagar can recognize their own kind by the lack of a soul. Kathy tells Buffy that she left her dimension without permission to attend college and fears that her family of demons will come to take her back. So she wanted to "borrow" Buffy's soul so that when the Mok'tagar came looking, Buffy would be the one without a soul and they would take her instead of Kathy.

Giles casts a spell from his flat that returns the parts of Buffy's soul already taken during the previous nights. Taparrich arrives to take Kathy back. He opens a portal and they both disappear.

Having had her own roommate problems, Willow moves in with Buffy and apologizes for doubting her suspicions on Kathy, and is forgiven. However, when Willow takes a bite out of Buffy's sandwich, Buffy begins to react in a similar fashion to Willow's own annoying habits.