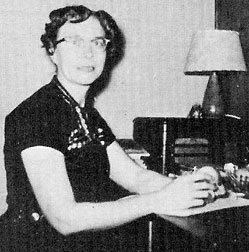 "Sometimes it's best to take the hand of a child—a Seeing child—and let them do the leading."
Zenna Chlarson Henderson (November 1, 1917 – May 11, 1983) was a Hugo-nominated American author of speculative fiction celebrated as an early pioneer of female writers in the golden age of sci-fi, publishing her first story in 1926 and the majority of her work in the 1950s and 1960s. She is best-known for her short stories of "The People": a refugee race of gentle, humanoid aliens who barely manage to escape their doomed planet and crash-land on Earth, where some of their numbers are scattered and lost. A number of her stories involve one of the lost People eventually being discovered by a larger group and their joyous reunion. The People possess various Psychic Powers such as Flight, Healing Hands, Psychic Surgery, and a degree of Genetic Memory that can be passed down to their offspring to remember the Home, their beautiful planet of origin.
Advertisement:

Outside of these stories, Henderson also wrote a number of stories revolving around psychic or magical children, often from the perspective of an understanding teacher trying to unravel the mystery. Henderson herself was an elementary school teacher for over forty years and had a deep love and appreciation for children and their imaginations.

Not all of her fare is so gentle. A good number of her short stories verge on outright horror, including one story, "Hush!", later developed into an episode of Tales from the Darkside. Others deal with dark subject matter, such as domestic abuse, child abuse and neglect, genocide, and suicide.

Many of her stories, in particular the People stories, are notable for their overtly spiritual themes. Henderson herself was raised Mormon but fell away from the church after a divorce. Under normal circumstances, her religion wouldn't bear mentioning, but you really can't not notice the allusions, with many stories including or titled after Biblical quotes. Fortunately, the stories stand beautifully on their own and Henderson's notion of spirituality is one of inclusion, welcome, and homecoming.

The People stories were adapted into the 1972 Made-for-TV Movie The People, featuring William Shatner and based primarily on the short story "Pottage." It's long been suspected

that Alexander Key's Escape to Witch Mountain, which came out about the same time as The People: No Different Flesh and was subsequently adapted by Disney into the Witch Mountain films, may be a Serial Numbers Filed Off adaptation of Henderson's "People" stories, but at best Alexander Key can be said to be inspired by Henderson, not ripping off her ideas. Her influence on him has never been confirmed, although many people who like Witch Mountain often fall in love with the People stories.

The works of Zenna Henderson provide examples of the following tropes: