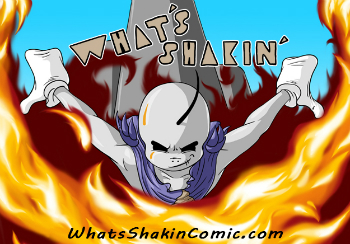 is a fantasy webcomic by Shawn Tommelleo, creator of Coffin Comics. The story follows Coffinshaker, Nith, and Ell. Coffin, a born fire mage and last of his kind, travels with his two mage friends (ok, Nith is a battlemage, but close enough) to uncover a wicked plot to use his unique abilities to power the evil "fire god" Fred.