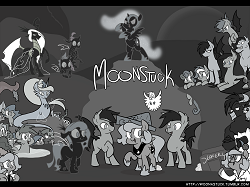 "This is a humor blog about a pony on the moon. Don't take it too seriously."

is a very silly Ask a Pony Tumblr run by Egophiliac. In the style of Problem Sleuth, it chronicles young Woona and her random adventures in and out of the moon. It finished November 4, 2012.

An (unofficial) audio version can be found here