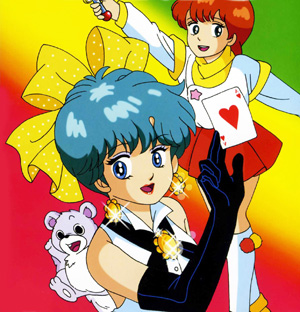 Magical Emi, the Magic Star is the third Magical Girl series created by Studio Pierrot, airing from 1985 to 1986.

Mai Kazuki is an aspiring magician, but her skills aren't good enough to get her into her grandparents' Magic Carat troupe. Then one day, she is visited by a mirror fairy named Topo, who gives her a magic bracelet that can transform Mai into an 18-year-old version of herself. As Magical Emi, Mai uses her magic to help people and participate in her grandparents' shows.