Anime / The Story of Cinderella 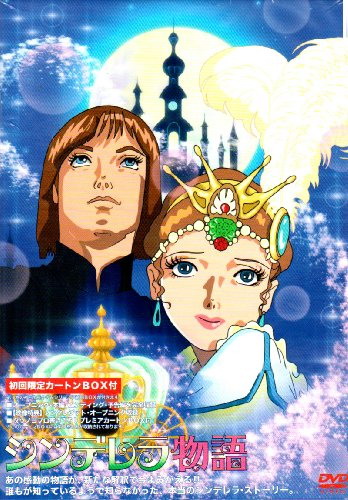 You won't see her like that for most of the series.
Advertisement:

A 26-episode anime adaptation of the famous fairy tail, co-produced by Tatsunoko Production and Italian animation studio Mondo TV. The Story of Cinderella opens as Cinderella's life changes for the worse when her father leaves on a business trip. No sooner is he out of sight than Cinderella's stepmother has unceremoniously moved her own daughters into Cinderella's room, thrown out her things, handed her a servant's dress, and put her to work doing all manner of menial labor. The series covers Cinderella's trials and tribulations as she tries to adapt to her new life while suffering the abuse of her mother and sisters. All the while, her fairy godmother, Paulette, subtly watches her and tries to influence events to fix Cinderella's life without her noticing. One of her first acts in this is to grant several of the animals of the house the power of speech, thus giving Cinderella companions in her dog Patch, a pair of mice named Chuchu and Bingo, and a bird named Pappy. The animals provide her company as well as help with her chores. The biggest twist in the series is that Cinderella meets her Prince Charming early - except here he's the roguish Prince Charles, who has a habit of sneaking out of the castle and meets Cinderella by accident while disguised as a commoner. The two have a few misunderstandings before becoming friends and start having adventures together. Meanwhile, the villainous Duke Zaral plots against the royal family throughout the story, at times working Cinderella into his plots and machinations. The series eventually culminates in the ball in which the fairy tale ends, but with its own unique twist.

The Story of Cinderella originally aired on NHK in 1996 under its Japanese title of Cinderella Monogatari. MondoTV aired the Italian version (retitled "La Cenerentola") on Italia 1 in 1997 and also produced at many more foreign language dubs, including an English language version that appears to have been dubbed in Canada and simply titled "Cinderella". It's unclear when and where the various dubs aired - the Italian version bears a 1995 copyright despite its initial broadcast being two years later. MondoWorld's official Youtube channel

now streams ten of the foreign language dubs they produced for free, including the original Italian dub and the English dub.