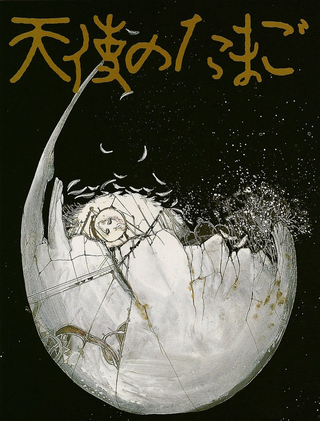 "This is what would happen if Tarkovsky made an anime."
— a YouTube commentator
Advertisement:

Angel's Egg (天使のたまご / Tenshi no Tamago in Japanese) is a surreal 1985 animated film which was directed by Mamoru Oshii and featured art designs by Yoshitaka Amano. The film centers around a young girl protecting an egg in an abandoned gothic city who meets a mysterious man with a cross-shaped rifle. The rest is...a bit harder to describe, but it's extremely beautiful nonetheless.

The film shows a number of art film inspirations, with Oshii himself mentioning Andrei Tarkovsky as a major influence (which is reflected in the quote above). While Angel's Egg was a financial and critical flop on release, it would be rediscovered by Western anime fans in the 1990s, becoming a Cult Classic, which in turn influenced later opinions on it in Japan. It also had a notable impact on other animators of the time, in part because several of the animators who worked on it would later go on to work for Studio Ghibli.