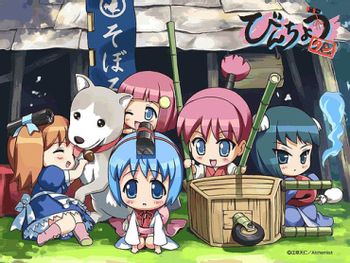 Center:Binchou-tan. L-to-R: Kunugi-tan, Saji, Chiku-rin, Chiku-tan, Ren-tan. Not shown: Aloe.
Binchou-tan is a little girl who lives on her own in a hut in the middle of the forest. She survives due to her big connection with the surrounding nature and often gets help from animals by giving them food in return. Somehow she also seems to be able to change her size, since she can be picked up by little birds for transportation.
Advertisement:

She regularly performs jobs in the idyllic town at the foot of the hill, where she meets all kinds of people. Although lonely at first, she gradually becomes friends with other girls her age—and who, just like herself, tend to be named after various kinds of charcoal, which they also use as hair-ornaments.

The main character started as a mascot for Japanese gaming company Alchemist. In 2003 a manga about the character was created and in 2006 Studio DEEN produced an animated series around her. The show immediately became (in)famous for the saccharine tone and almost ridiculously-cute designs for the main cast. Despite its obvious ultra-moe appeal, the series still manages to tell a heartwarming story of a little girl finding her way in life, immensely helped by the excellent music and lovely backgrounds.