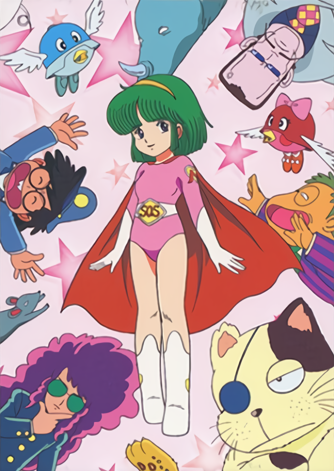 Nanako SOS is a manga series created by Hideo Azuma, later adapted into an anime in 1983 by Movie International Company (MIC) and ran for 39 episodes on Fuji TV.
Advertisement:

It’s an odd mix of an unconventional Magical Girl comedy series and a parody of the Superhero genres. Nanako is a young girl, she has superpowers, but has also lost her memory. She's found by a greedy and opportunistic Teen Genius student named Yotsuya who promises to help her get her memory if she will join his detective agency. In reality, he only wants to use her powers for his own personal gain and for his agency, although the naïve Nanako is unaware of it. Meanwhile, Yotsuya's short, nerdy best friend Iidabashi falls in love with Nanako. Throughout the story, Nanako will face several bizarre villains who are also interested in her for various reasons.

currently holds the rights to the series worldwide (along with most of MIC's productions), and the international title for the series is Nana the Supergirl, which was the name used for its distribution and TV airings in Italy, France, Germany and Russia.