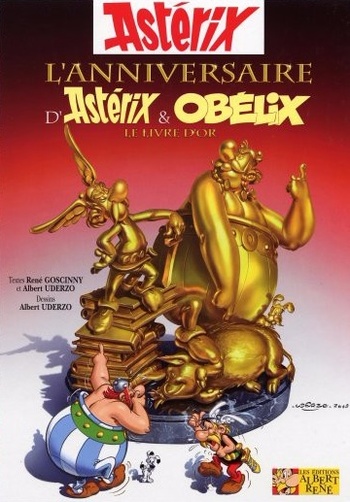 It's Asterix's and Obelix's birthday. Friends they've made from all over come to the village to discuss what would make a good gift for the heroes.

Our story begins with Albert Uderzo giving readers a glimpse at the future of Asterix's village. In the year AD, the fortifications protecting the village have fallen into disrepair, Roman estates have been built near the four main camps, and the main cast have become old men. While his son and wife go shopping at Compendium, Asterix takes his grandchildren to see Obelix, who is not happy that with the forests torn down to make room for the Romans, there are no wild boars to eat. Getafix, now with an even longer beard, comes along accompanied Uderzo himself, who takes credit for the current affairs. Outraged, Obelix lays out one of his creators with an uppercut, and, his lesson learned and teeth missing, Uderzo restores the timeline to the year 50 BC. Asterix and Obelix go out for a hunt, writing off the previous events as a dream.

Meanwhile, the village is visited by large numbers. They are here to celebrate the birthdays of Asterix and Obelix, and a discussion is held as to what kind of present our heroes deserve. Mrs. Geriatrix suggests a wardrobe upgrade, and presents a look at Obelix in different styles of clothing. As for Asterix, he may look suitable done up like a Marsupilami.

Postaldistrix the messenger reveals that he has parcels for Asterix and Obelix, and even delivered a carving for Obelix the previous day. Upon realizing that it was from Panacea, but unable to read it himself having never learned how, Obelix went to see Getafix for help, without admitting why. Getafix provided the larger Gaul with a picture book to help learn the alphabet, but naturally, Obelix became confused when he read each letter to mean a different thing. Asterix, deciding to help, read the message as, "Dear Obelix, Happy Birthday — Panacea." leaving Obelix to throw the picture book back at Getafix in frustration.

Postaldistrix presents other birthday greetings, such as a message from Edifis the Egyptian from Asterix and Cleopatra, and even a greeting from the pirates. Ekonomicrisis the Pheonician suggests that since Asterix and Obelix are always traveling, they might find a guidebook useful. Cacophonix wants to give the pair autographed slabs of his songs.

Meanwhile, Impedimenta brings the ladies of the village (including Panacea, Influenza from Asterix and Caesar's Gift and Bravura from Asterix and the Secret Weapon) inside for a talk on Asterix and Obelix's marital status — or lack thereof. Talk turns to how a wife could change them, and why they haven't found a decent girl. Influenza feels that Asterix may someday get married, Impedimeta feels sorry for any future brides, who would have to put up with Asterix's travels and Obelix's appetite.

Squareonthehypotenus wants to build a theme park in Asterix and Obelix's honor, proposing many different attractions. Laurensolivius from Asterix and the Cauldron feels a major theatre production would do better. Prolix, however, predicts that works of art based on them will be made, enough to fill a museum.

Meanwhile, in Amorica's coast, Cleopatra demands that Julius Caesar, as thanks for the Gauls for saving their son Caesarion from Brutus, present his own gift to them. Caesar calls for his pharmacist to concoct a special wine with a little secret surprise, figuring he can get revenge on the Gauls for constantly humiliating him and appease Cleopatra's demands at the same time. He has the unwitting centurions of the four surrounding camps deliver the wine. Getafix, suspecting a trick, invites the Romans to each have a toast of the wine. They do, and are forced to flee — it contained ricin oil, a powerful laxative.

Asterix and Obelix return from their boar hunt. Obelix apologizes for hurting Getafix earlier, and the forgiving druid sends the two heroes into the village to receive their birthday greetings from the various friends, Romans, and countrymen they have met over the course of their adventures.