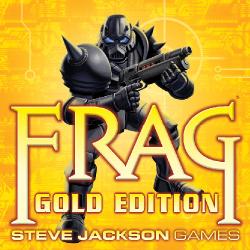 If it moves, shoot it. If it's still moving, shoot it again.
Computer games are mindless and violent. This is even better.
Advertisement:

You are a fierce warrior. You are trying to kill your opponents with anything you can get your hands on. Unfortunately, they are all trying to do the same thing. Frag

is a violent, bloody, mindless video game...on a board. Made by Steve Jackson of Munchkin

fame, Frag pits you against your buddies in a brutal battle for ultimate dominance. Available weapons include chainsaws, machine guns, energy rifles, flamethrowers, and a nuclear bomb. Seriously.