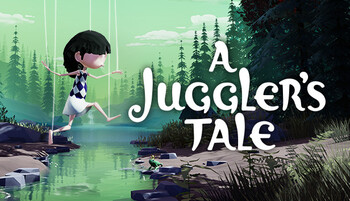 An epic tale of the quest for freedom with strings attached!
A Juggler's Tale is an indie story-driven side-scrolling platform game developed by kaleidoscope and published by Mixtvision and released on September 29, 2021.
Advertisement:

Abby is a marionette that entertains crowds in a circus but then spends night after night locked in a cage longing for freedom. One night when the chance for freedom calls, she breaks out of her cage and enters the open world, but very quickly finds that it is a very dangerous place. Soon in the middle of a war-torn medieval fairy tale world surrounded by starving citizens and constantly on the hunt by her former assistant Tonda, she soon finds that freedom is not as easy to get as she once thought.