Film / Harry and the Butler 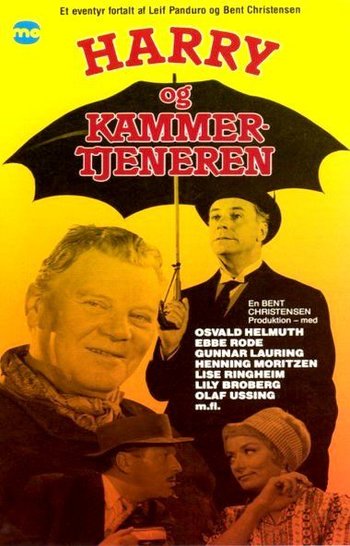 Harry and the Butler (Harry og kammertjeneren) is a 1961 film from Denmark directed by Bent Christensen.

Harry Adams is a poor old man without family. He lives in a shack in a junkyard, that the owner lets him have rent-free in return for his services as a security guard, although Harry makes no effort to keep the neighborhood kids out. He pays for food with the meager salary he earns as a deliveryman for the local grocer. He is not without friends; his buddies "Prince Igor" (a petty criminal) and "the Bishop" (who collects for fake charities) regularly drop by for card games, and he's known to other people in the local neighborhood. But he is still melancholy, reflecting how his life has had no purpose and that when he dies, he'll be forgotten.

Out of nowhere, a distant aunt dies and leaves Harry with 25,000 kroner. A lot of taxes and an exorbitant lawyer's fee leaves Harry with 3300 kroner, which he has to decide how to spend. He decides to indulge in an old fantasy of his, and get a butler, to serve him and pamper him like a gentleman until the money runs out.

So that's how a fellow named Walter Fabricius, a valet with a lifetime's worth of service to Old Money aristocrats and princes but who is now unemployed, enters into 11 weeks worth of service to Harry. Fabricius is appalled at serving a poor old man who lives in a dusty, crumbling shack, but his dedication to service as a higher calling leads him to take the job. Naturally, Fabricius and Harry form a bond.