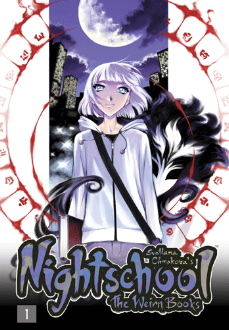 An OEL Manga by Svetlana Chmakova, and is being published by Yen Press.

The world of Nightschool is very much like our own, at least during the day. But by night, all sorts of creatures from vampires to demons to Weirns (a magical species with Astral partners) roam the streets. Aside from the physical differences, they’re a lot like us, really—including the fact that their kids still have to go to school.

Benjamin Theron Nightschool, the titular academy, is just another public school by day. But at six o’clock each evening, the school’s Day Keeper seals the doors to Muggles, and a new class roams the halls. The Night Keeper, who trades places with the Day Keeper at dusk, ensures that the school is kept running smoothly and is protected from prying eyes.

Our heroine is Alex Treveney, a 13-year-old Weirn who has been home schooled by her older sister Sarah for the past few years. Snarky and socially withdrawn, Alex is strangely resistant to the idea of going to school with the other kids, despite her sister’s encouragement. But when Sarah suddenly vanishes from her new job as the school’s Night Keeper, along with all record of her ever existing, Alex heads to the school to find out just what happened to her.

Meanwhile, Daemon, one of the city’s Hunters, receives a frightened message from one of his students, a young seer named Marina, about a vision she’s had. Something that was sealed away has broken free, and she and six other children quietly walk away as death and destruction befall the land. But while Marina and five of the other children are "still walking," one of these harbingers is "already here..." in the form of one Alex Treveney.